//flags for link to german page, if page exists 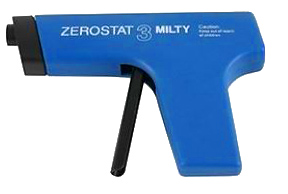 The Zerostat 3 anti-static gun is an effective and professional tool to reduce and remove static charges on insulating surfaces such as plastic, glass, films, porcelain,  ceramics, storage boxes etc. It contains a piezo-electric crystal device with a trigger mechanism which generates positive and negative streams of ions. The Zerostat 3 includes a dual cycle operation: when the trigger is squeezed, positive ions are released. When the trigger is released, negative ions are generated.

Application
The Zerostat 3 anti-static gun can remove or substantially reduce static charges on non-conductive surfaces. It can be used on plastics, glass, ceramics, films, lenses, grid boxes, storage boxes, microscope slides, etc. The Zerostat 3 can also be used to threat surface to prevent static charging for several hours. Example: you can threat TEM grid boxes before storing the TEM grids. It also reduces the accumulation of dust on treated surfaces; perfect for records or DVDs. Unlike anti-static sprays, using the Zerostat 3 does not leave any residue on surfaces which is ideal for microscopy applications.

Operation
Hold the Milty  Zerostat 3 instrument about 30 cm away from the surface. Point to the surface and squeeze the trigger slowly to produce positive ions; a clicking sound is heard when ions are produced.  Release the trigger slowly and negative ions are produced. The ions cover an area with a diameter of approximately 40 cm. The charge from the Zerostat is approximately 1.5 Coulomb. The Zerostat 3 does not need any batteries or mains supply, it is built to last 50,000 trigger cycles. The housing is made from durable blue ABS. There are no serviceable parts in the Zerostat 3.
It is supplied with a special ion indicator to test the unit. Insert the indicator into the pistol, squeeze the handle gently and the red glow indicates the ion flow.


*Prices without VAT, but within the EU, we have to check for valid VAT-ID.